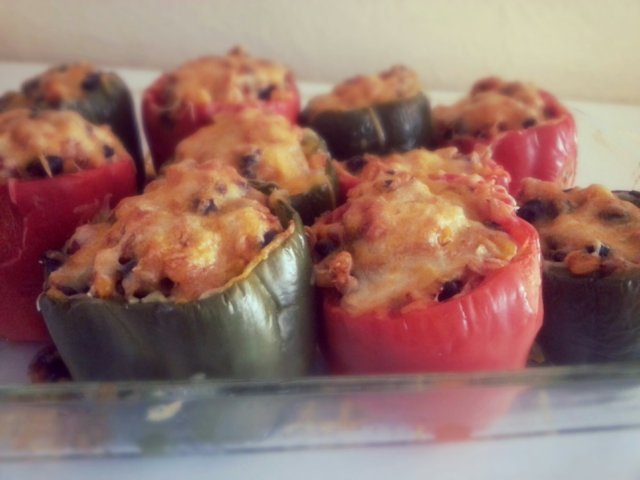 So I have fallen into the habit of cooking.  Which wasn’t something I enjoyed. I hate to break it to you but this magical art of “cooking” mainly consists of chopping up stuff and washing dishes – a lot of dishes. Ah well. But it started with actually making lunches for my husband for work. Before I would highlight the benefits of a Protein Shake / Bar diet, haha! A few days in a row turned into weeks in a row and my competitiveness kicked in. A piece of chicken and some broccoli turned into Italian lemon salmon, sour cream and chive potatoes, and parmesan roasted asparagus. At that point realised I was crazy and went back to more normal food. Not that I don’t enjoy more festive meals but, come on, I have kids. And a budget. And an occasional craving for mac and cheese…

So now a few months out into this crazy habit I have settled into more of a routine and figured out meals that work. The first one is Vegan Stuffed Bell Peppers.

I am not Vegan, nor do I plan to be in the near future, but there are many benefits to this meal. 1 – it costs less than your meat variety, 2 – it is way easier to prepare, 3 – it tastes really good without meat, 4 – it, um, well, digests nicely.

So without further delay;

I throw my rice in a rice cooker while I get the rest of the stuff ready.

Cut off tops and gut bell peppers. Toss them in water and boil for about 10 minutes. In another pan cook diced onions and garlic in olive oil until soft. Add ready-cut tomatoes, rice, beans, corn, and shake on taco seasoning until it tastes how you like it.

Line peppers in a pan and fill with stuffing, top with cheese (optional), and bake at 350 for 30 minutes.

That’s it. Super forgiving recipe. Change it up and it should still be good. Forget about it in the oven for a bit, still is good. Reheat leftovers and they’re still good. Use extra stuffing in warmed corn tortillas,  amazing.  Yum.